CONFESSIONS OF AN INTROVERT 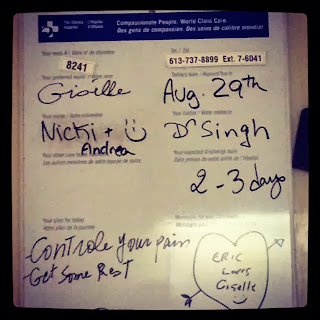 The Day Before – Monday August 26th

It was a sunny and warm day when Eric and I made our way to Ottawa.  We arrived at the Rotel, just after 3:20 p.m. The Rotel, for those of you who don’t know is a hotel facility for patients and families of The Ottawa General Hospital.  It may also service the other hospitals in the area but I am not sure.

After a great meal at Kelsey’s we headed back to the Rotel. Looking back it was a good thing that there was nothing to do in and round the area or I would of wanted to stay up late. Instead we turned in early. Unbeknownst to me, the next day was going to be a doozy.

The Day of – Tuesday August 27th

We were told to arrive for 7:30am. My surgery was set for 10:30am. After the nurses performed their preliminary checks I took a nap.  What else was I going to do for the next little while? I can’t say what caused me to wake up but I did, with a start. I leaned over to the computer that was next to my bed and read the time, 12:20pm. A few words passed through my mind, none of them good. From there the questions started: Did I have the surgery? Did I miss the surgery? Am I in an episode of The Walking Dead?

I tabled all of the questions and got out of bed. This action quickly gave me my answers. Yes the fibroids were still there. Yes I still needed surgery and No, as far as I could tell, people were not trying to bite each other…at least not on my side of the room. Within minutes of waking, the nurses arrived. It was time.

It was in the Operating Room that I finally met my Surgeon.  Oh have no fear, your friend here had read every article I could find on him. My Surgeon is one of the leaders in his field, and this guarantees a long paper trail. My Gynaecologist also thinks extremely highly of him and had recommended me to see him in the first place.

Pleasantries were exchanged, anaesthesia was administered and it was lights out for me.

Pain, lots of pain greeted me when I woke up. I was told I was in the ICU. The rest was a jumbled cornucopia of thoughts. Abdominal pain, back pain, laboured breathing, me yelling that Eric needed to book another night at the Rotel, darkness wanting to take me, hearing that I was bleeding internally, signing forms, hearing that I was going into shock, my Surgeon talking to Eric on the phone, going in and out of consciousness and being rolled back into the OR and finally letting the darkness take me.

I woke up. For this, I am eternally grateful.

What took place – In no particular order

The Procedure – A Laparoscopic Hysterectomy

Due to the enormous size of my uterus it was a difficult surgery. 55 fibroids were living it up in my uterus, some the size of peas, some the size of grapefruits. Outside of my uterus there were was a host of fibroids who had decided that they were going to take over.  I lost a 1.2 litres of blood which equates to 1/3rd of all the blood in my body. I had internal bleeding after the first surgery.  My breathing, and heart rate were erratic. I was going into shock. During the second surgery the exact location of where the blood had come from could not be identified. I was given two blood transfusions. There was a host of other stuff, but you get the gist. My Surgeon took every precaution with ensuring that I would not encounter this issue in the future. I remained in the hospital for three days, and was discharged on Friday August 30th.

Trust your gut, not your head when it comes to your health. If you feel off, talk to your Doctor. If you have an ultrasound a year and a bit before you go in for surgery, request another one, before the date of your surgery. No one had any idea of the size of my uterus and the fact that is housed over 55 fibroids. Outside of it, fibroids had become the dominant force. They had fused with my ovaries. Heck, they had fused with anything they could come into contact with inside me. Every thing had to come out. 2.7 pounds came out of me. An updated ultrasound would of prepared everyone for the drama which was growing inside of me.

I would love to hear from you.  Have you gone through an experience that made you truly grateful?